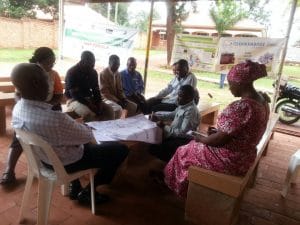 Julia works in Sseguku (between Entebbe and Kampala) with the Potters Heart Child Foundation (PHCF). In March she had some time to travel around different places, from Eastern Uganda to Rwanda. The mid-year-seminar also took place in March in Kitala. 2/3 of the this year’s volunteers’ time in Uganda is over, only 4 months left. Or better: Still 4 months left, yeah!

From 3rd to 4th of March I went to Lake Mburo National Park near Mbarara with Franziska, one of my fellow volunteers. I was really impressed by not only all the animals we saw but also by the peacefulness and quietness of the park.

One week later I spent 4 days (08.-12.03.) in Lira, Soroti and Mbale.
I traveled with a friend I got to know through my dancing group. In Lira we stayed with his sister who had married a man from there. We had a very good time and also the family was great and even drove us around Lira town to show us everything. In Soroti we visited some famous rocks and also saw the East African flying school (though we were not allowed to enter). In Mbale we unfortunately did not have much time left, so we were just able to visit town and see Mount Elgon from far.

Then, from 18th to 22nd of March we had our in-between seminar in Kitala with all volunteers. It was fantastic. I really enjoyed the time there and I learned a lot. We spoke about very many different topics, from our emotions about the past months to structural racism to adjustments of VUGA structures. For the adjustments we brainstormed and wrote concept papers for possible improvements (e.g. of the budget or the criteria for choosing volunteers).
Additionally, Emanuel, Meta and I were finally handed out our Luganda course certificates.

Afterwards, I went for a longer trip to Kabale and Rwanda (30.03.-08.04). The trip was awesome! The first days we spent in Kabale and at Lake Bunyonyi. Besides other activities, we hiked a lot

in the hilly surroundings of Kabale and went for canoeing on the lake. Additionally, at the lake we found the funniest guide I ever had. After finding out how young we are, “Johnson” saw it as his responsibility to explain to his “bebes” everything he knew. From facts about the lake, words in the local language and local customs to the use of all plants we found on our way (inclusive demonstration of how certain leaves are used as local toilet paper).
After that we travelled to Rwanda. The capital city Kigali was the first stop there. First, we found Kigali very strange. Actually, it reminded me much more of Germany than of Uganda. There were a thousand factors leading me to that impression, so explaining it would take to long here, but what I can say is: It took us nearly two days to get a bit used to Kigali. And some things were already adapted in Kigali that will take many more years in Germany: The Rwandese use cards to pay for public transport. The buses in the capital city do not accept cash, instead you load money on a card at one of the many bus stations and then you hold it in front of a scanner when entering. Without help from a friend (of a friend of my travel colleague) we would surely have gotten lost and finding someone who would be able to explain the system in English would have been very difficult.
In our time in Kigali we visited the Genocide Memorial and also the Convention Center, the (if we believe our friend and guide) most expensive building of East Africa with a luxurious hotel and assembly rooms. Especially the Genocide Memorial I can recommend because it gives a lot of information on what happened before, during and after the genocide of 1994 and also compares it to other genocides worldwide. It was impressive and shocking at the same time. There are also thousands of victims buried at that place.

But most interesting in Kigali was actually ordering for food. Because of a lack of French and Kinyarwanda communication skills this was extremely

difficult and an adventure of itself. One time we needed over one hour to order for food and as we still had failed to describe what we wanted to eat in the end we had to come to the kitchen where the pastor (yes the pastor, we ate in some local place, so probably we were the first foreigners there and when they saw us, the owner of the restaurant sent the pastor to us, probably hoping he knows best how to deal with us) put different foods on a plate holding it in front of us asking “this??”. That was the funniest supper I ever had.
My travel colleague also has some friends in Gisenyi, so after Kigali we spent some wonderful days there with them while they showed us their city, which is directly bordering Goma, a big Congolese city, and is near to the Virunga volcanoes. Moreover, we did a boat tour on Lake Kivu, visited some islands and hot springs and had a pick nick on the beach of beautiful Lake Kivu. One of the islands we went to was called “Ladies’ island”. The owner of our boat told us that in history, women who were not a

virgin anymore, but were not married yet, were left on that stony place in the middle of the lake. – And then the Congolese came with their canoes from the other side of the lake and stole the women from there. If it is true is another question. But an interesting story is it definitely.

This trip was really a time I will never forget.

But also another important thing happened in March: I changed my host family. After struggling with my first host family for 7 months, I finally decided to change host family. And that was the best decision I could have made: Now I feel much more comfortable at home and we find many topics to talk about. I am happy!

At work, I did my usual writing tasks and attended some meetings dealing with networking between different NGOs. The participants had the chance to get to know the other NGOs attending, their areas of work and problems they have to struggle with. We worked on all this in small groups and presented it in the end in front of all. In that way it was also a good methodical training. Moreover, I wrote a concept paper for the budget of VUGA.

I am very sad that already 2/3 of my time in Uganda is over. 8 months have gone. Only 4 are left. I do not feel ready to leave yet. 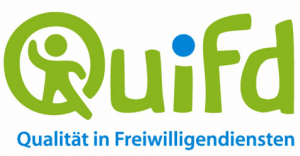